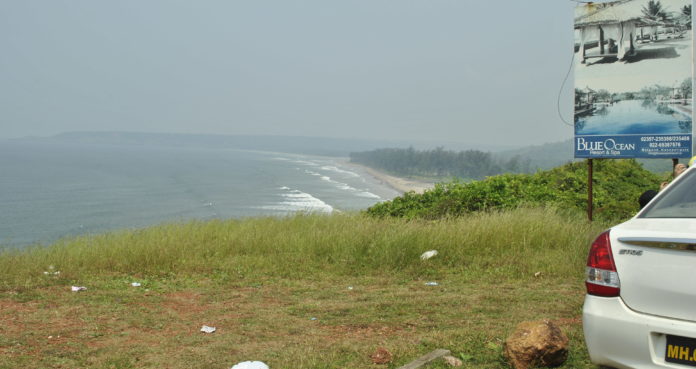 Driving on a coastal road has its own unique charm and is a growing trend globally amongst tourists looking for experiential travel. The increasing number of tourists visiting The Great Ocean Road in Australia and The Atlantic Road in Norway every year stand a testimony to this fact.

India is blessed with a long coastline that runs across various states and cultures. Parts of this coastline on the southern region is flanked by two mountain ranges – Eastern & Western Ghats – that provide these regions a unique flora and fauna. It is a pity that in spite of having such a rich natural bounty, we don’t have an ocean route that can pull global tourists and drive tourism in the country. There are several things that the government can do to promote this. However, since this blog is not about policy issues, I would reserve these thoughts for another blog at a later date.

Drive from Ratnagiri to Ganpatipule

As shared in my earlier blog, I arrived in Ratnagiri with my wife (Supriya) and kid two days earlier and planned to visit Ganpatipule as part of our itinerary. There are two routes to reach Ganpatipule from Ratnagiri. The first one is an inland route which I did not enquire about much as it was definitely not the one I wanted to take. The second route, the Aare Ware Road runs alongside the coast and offers several scenic spots en route. I decided to take this route.

The distance from Ratnagiri to Ganpatipule through this route is approximately 25 Kilometres and it takes about an hour to reach in normal traffic conditions. As for us, it took us more than 3 hours as we made several pit-stops to enjoy several scenic sights en route.

As soon as we escaped Ratnagiri city limits, the first sight to catch our attention was a large estuary with a healthy growth of mangroves. We noticed a nicely built pathway that led to the estuary and decided to make a halt. I later got to know that the region has a healthy mangrove vegetation, which ironically is on the decline. The best part of this scenic spot was that we were the only people who were present and there were no other tourists. We walked down the pathway at leisure till the end and sat there for a few minutes, getting a glimpse of the pristine greens and clicked a few pictures for our memory. After spending about 30 minutes at the point, we decided to move on with our journey.

Our next stop was a small coastal fishing village. Although we had encountered several coastal villages on our route over the past week in the Konkan region, this one had a unique allure. It was a small village located on a hillock and looked like an Indian version of the postcard fishing towns located alongside the Mediterranean coast in Europe (Pardon my imagination!!!!). We stopped here for a few minutes and then progressed further.

A few minutes after crossing the coastal fishing village, the scent of the sea and sight of the hills greeted us. As we drove further, the Aare- Waree Beach arrived on our left. The Aare-Waree Beach is one of the most popular beaches of the region. What amazed both me and my wife was the absence of tourists at the beach at such a peak hour of the day. We saw just 4-5 tourists at the beach who were already on their way out when we arrived. I was quite happy to experience this situation. After parking our car, all of us starting walking towards the beach which is a 250-300 meter walk from the main road. Once at the shore, the kid started off with his ‘sand-kit’ while Supriya and I looked around to soak the environs. It was unlike any other beach experiences we had had in the past. We literally had the entire beach to ourselves. There was not a single human being in-sight. Being a secluded beach and the waves strong, we decided not to venture into the water as it could be risky. After spending close to 45 minutes at the beach we progressed on our journey

Right after the Aare-Waree beach the road begins to make an upward climb. This is the last stretch of the journey from Ratnagiri to Ganpatipule and extends for close to ten kilometres. The beauty of this stretch of road is that it runs parallel to the sea, at an elevation and offers magnificent aerial views of the sea and the beaches below. It is a sight which very few destinations in India offer. The roads are narrow but well laid out. So, although traffic flows from both sides, it is a comfortable drive. Throughout this route, there are several ocean view-points that are ideal for photography and to experience the strong breeze and sight of the endless ocean in the horizon. Several small joints selling local Kokum Juice and Coconut water dot the road. What I liked about these shops were none of them were concrete structures. This is a very good initiative by the local administration as allowing concrete shops would destroy the natural beauty of this place. Also, the number of such shops were limited which kept the environs pristine and clean. The travel had made us thirsty and we did gulp several rounds of Kokum juice and coconut water on our way. 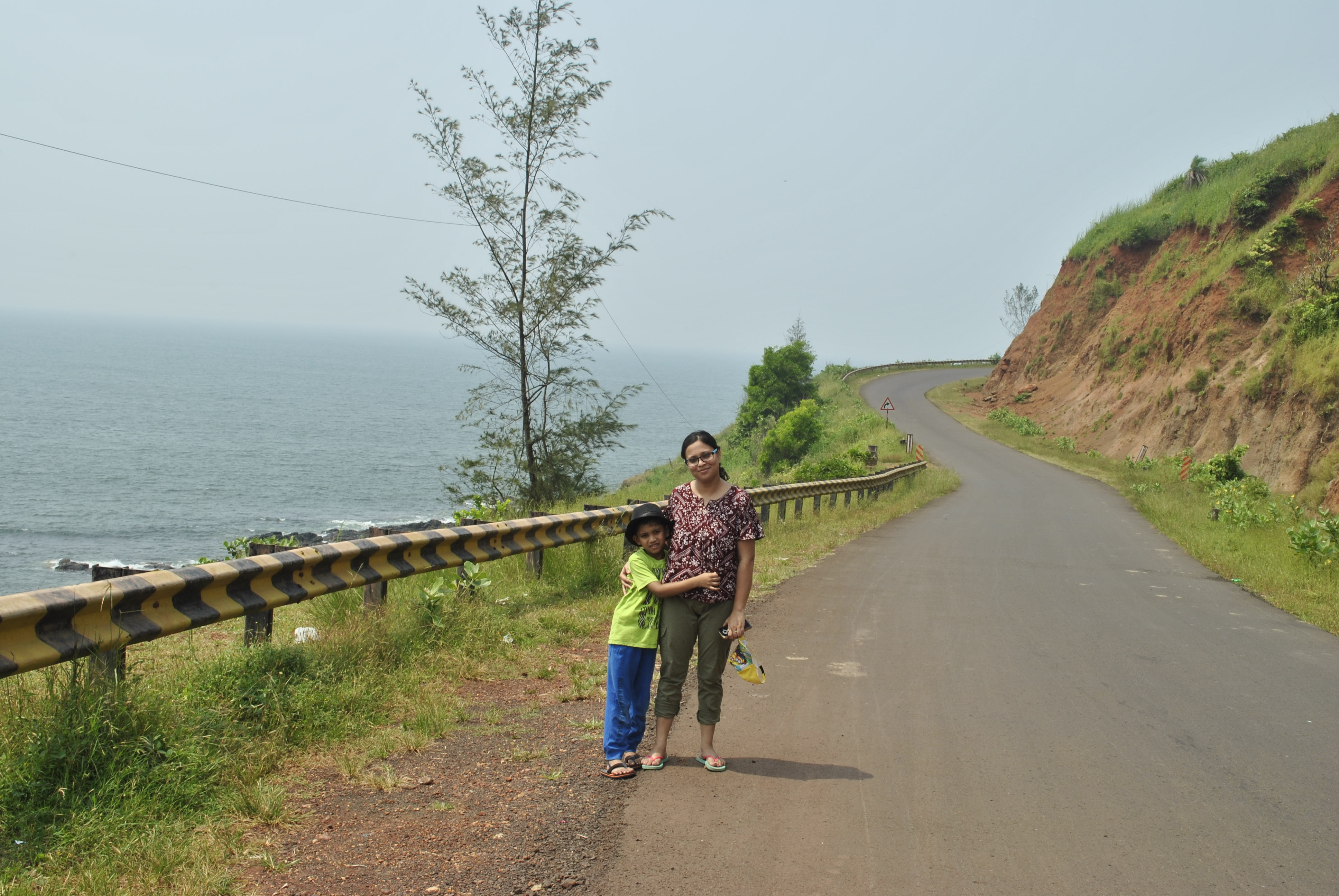 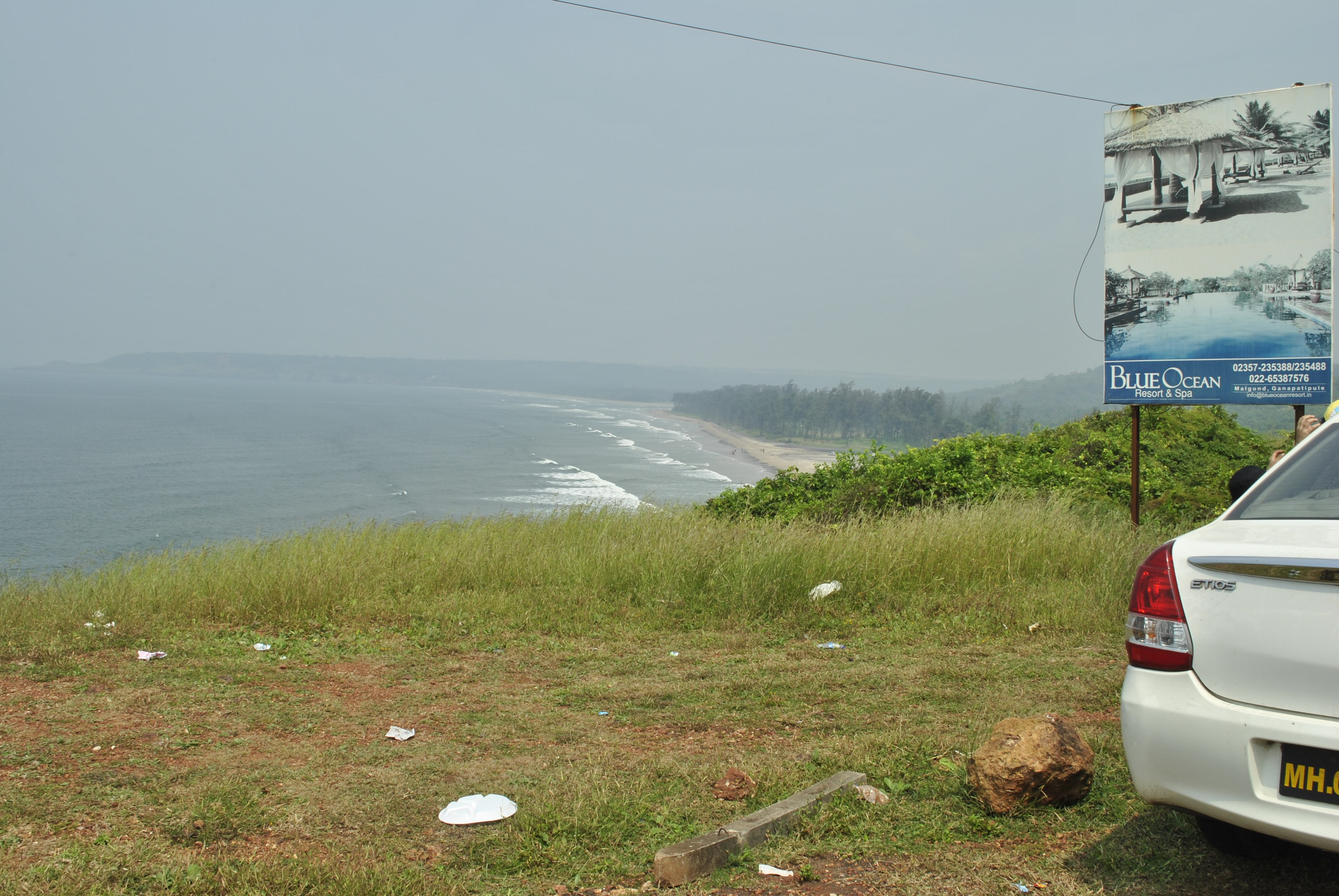 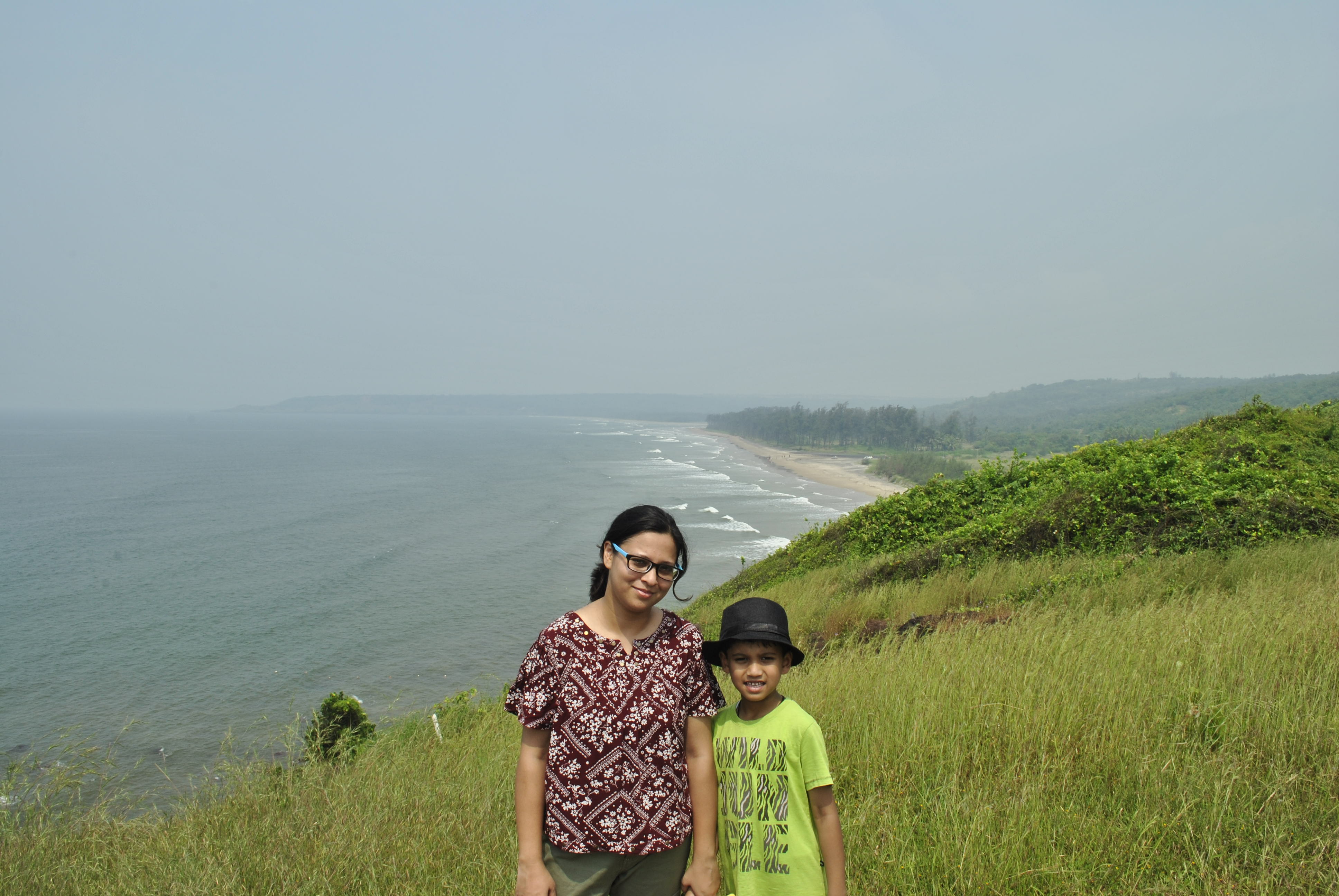 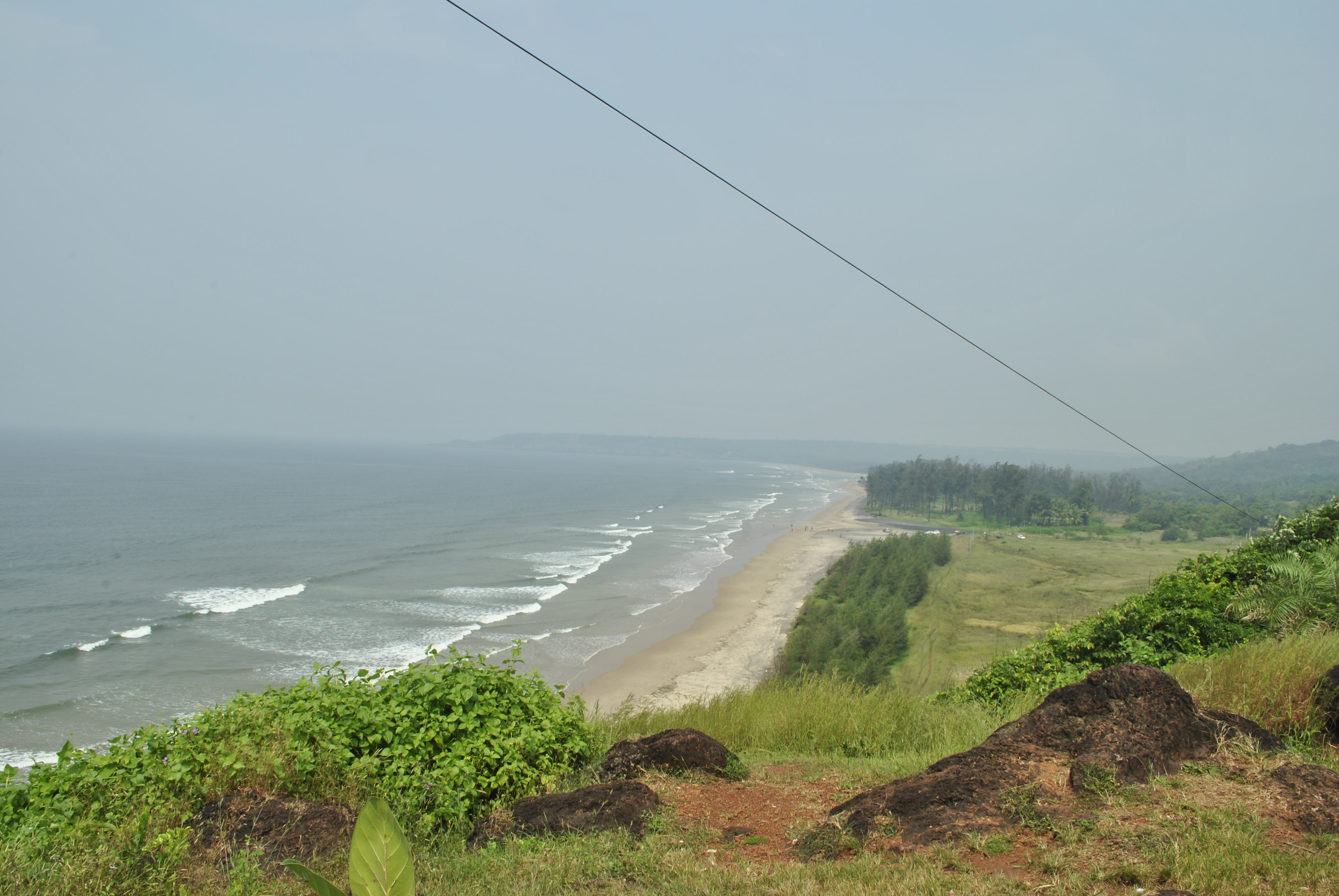 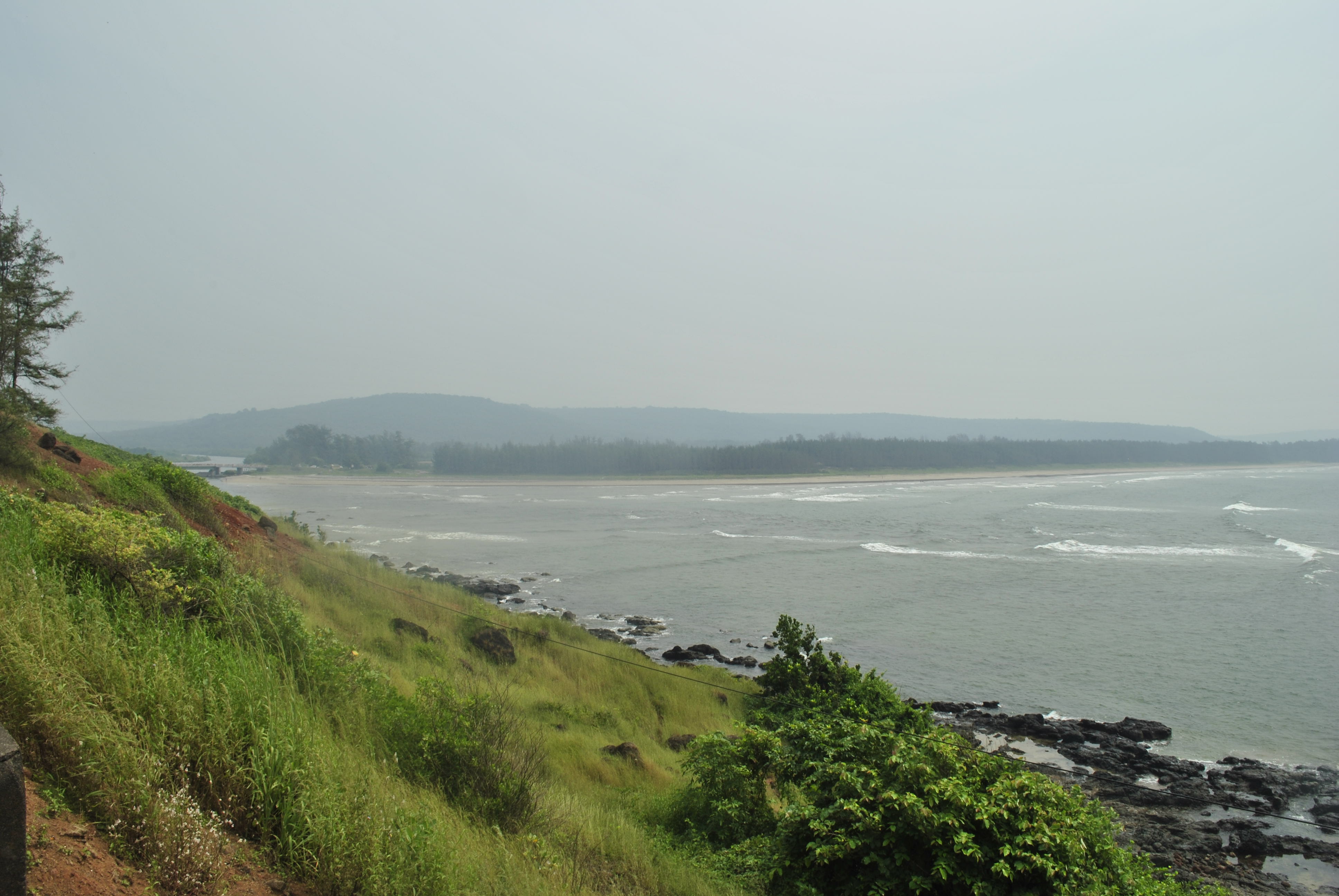 By the time we arrived at Ganpatipule it was afternoon and the sun was at its blazing best. Although we wanted to stay longer, the heat and humidity made the experience unpleasant. As such, we decided to leave for Ratnagiri after spending a few minutes at the Ganpatipule beach. There is a famous temple in Ganpatipule, dedicated to Indian Hindu Deity – Shri Ganesh – from which this small town derives its name. The temple is famous with travellers. However, we had limited time on our itinerary and as such decided to skip visiting the temple and reserved it for our next visit to this part of the country.

On our way back to Ratnagiri from Ganpatipule, we stopped at a local Malvani restaurant and had a sumptuous lunch consisting of local sea fish. Our short trip to Ganpatipule was really fulfilling and we planned to visit this this place in the future.

Our next leg of the journey was the drive from Ganpatipule to Goa, and we were quite excited for it.