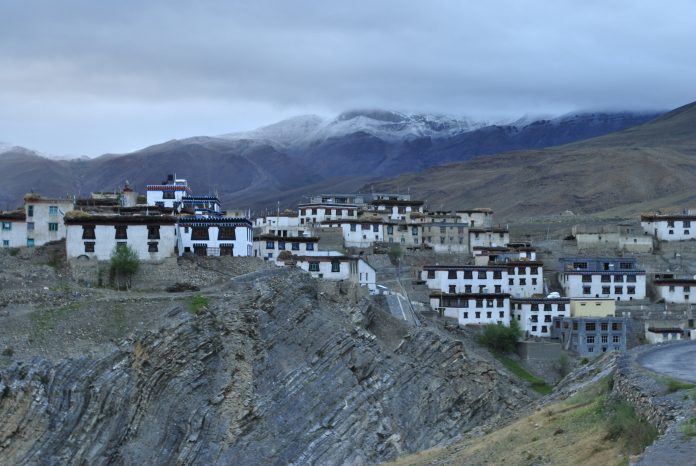 Kibber located approximately 20 kilometers from Kaza is a high mountain village in Spiti Valley, that is known for its picturesque locales, a wildlife sanctuary and clear night skies – a favourite amongst skygazers. The roads from Kaza to Kibber are smooth and the ride enjoyable.

Kibber is considered to be the second largest village in Spiti Valley. I find the words ‘second largest’ amusing, considering I found the total number of houses in the entire village to be less than 100. If you exclude the tourists on the streets, there were hardly people to be seen. Our guide told us that the village has a population of less than 500 people which is less than half of the number of people staying in my residential apartment in Delhi! It left me wondering what the smallest village in Spiti Valley would be like!!!!

My place of stay in Kibber was Tashi Zom, a small guest house with 4 independent rooms, located right at the entrance of the village.  The rooms were basic but clean which is good considering the remote location we were in. Tashi Zom also had a small restaurant which served a basic lunch and dinner menu.

I arrived in Kibber post noon and after a light lunch set out to explore the village. A popular trek from the village is a hike to ‘Chicham’ Ropeway. It is ropeway that helps people travel between Kibber and Chicham Village located on another mountain. A ride on the ‘Chicham’ ropeway is not for the faint hearted and strictly not recommended for people with vertigo problems.

I spent the early evening walking through the village and retired to my hotel as soon as the sun set in. I had planned to spend my evening lazing on the balcony of Tashi Zom and enjoying the sights of clear night sky at Kibber. As planned, I bought my bottle of rum and my laptop, played some music, drank the rum and enjoyed the evening before retiring for the day earlier than usual.