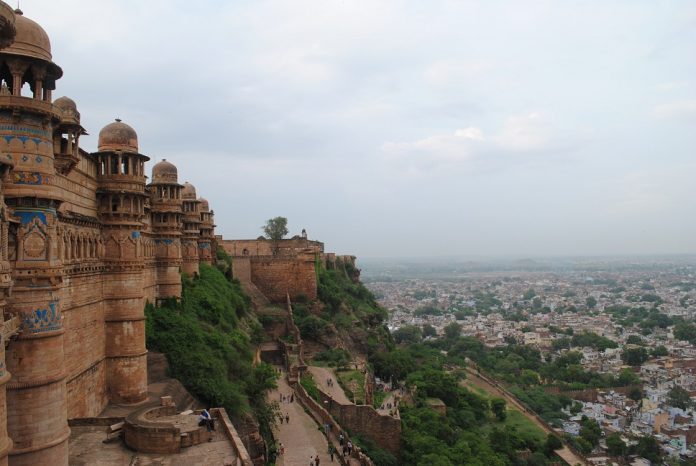 If you reside in Delhi and frequenting the hills of Uttarakhand and Himachal during your weekend breaks from the city have worn you out, then Gwalior could be an ideal choice to break the monotony. The city had been ruled by some of the most prominent dynasties of medieval India in the past and such is home to several palaces, forts and temples. It is a city steeped in rich cultural history and a visit offers tourists a memorable journey to its glorious past.

Gwalior is ideally located at a distance of just over 300 kilometers. With the opening of the Yamuna Expressway, the driving time to the city has reduced to less than five hours which makes it an ideal weekend destination from Delhi NCR region. I visited the city in the month of June, which is not the best of times to visit as the weather is quite hot. But as an ardent traveller, this was a minor deterrent compared to my enthusiasm to visit the city.

The drive from Delhi to Gwalior – half of which is through the high-speed Yamuna Expressway and the remaining stretch on Agra-Gwalior highway is smooth. At several stretches, the route passes through the ravines of Chambal Valley makes it unique experience. It is suggested that you travel through this section during the day as some parts of the highway are quite deserted even during day time.

We left Ghaziabad at around 7 in the morning and arrived in Gwalior at around 1 pm. The drive took us approximately six hours as we halted for breakfast and a few pit-stops in between for photographs. Also, there is a bad stretch of traffic in after reaching Agra – between Agra city and the Gwalior bypass that takes some time to cross over. The traffic on the highway is smooth and if lucky, it is possible to complete this journey in 4-5 hours.

Things to do in Gwalior

As mentioned earlier Gwalior is home to several forts, palaces, temples and other historical monuments. Due to its strategic location, this region was considered a prime territory by various dynasties that ruled India in the medieval period and was thus under various rules during various points of time. Each of these ruling dynasties constructed several interesting monuments which today act a major tourist attractions of the city.

Gwalior Fort – Located atop a large hill, Gwalior fort is undoubtedly the most important landmark of Gwalior. It is a must visit destination during a trip to Gwalior as the walls of this fort contain several places of historical and tourist interest. These include palaces like Man Mandir Palace, Karn Mahal, Vikram Mahal, Hathi Pol, Gujari Mahal; several famous medieval era temples like Teli Ka Mandir, Saas-Bahu twin temple amongst others. The fort also has an interesting ‘sound and light’ show in the evening which is something I strongly recommend everyone to attend. We visited the Gwalior fort post-lunch as we wanted to explore the fort and also attend the ‘Sound and Light’ show in the evening.

Gurudwara Data Bandi Chor Sahib – Located at one of the highest points within the Gwalior fort, the Gurudwara of Data Banda Chor Sahib is a place of significant historical importance. It was same place where the great Guru Har Gobind Singh, the sixth guru (holy men of Sikh community) was imprisoned by Mughal emperor Jehangir and later released. The Gurudwara is an important pilgrimage destination for Sikhs. It registers a significant number of visitors every day from around the world.

Jai Vilas Palace and Museum – The Jai Vilas Palace is a palace built in the 19th century by Maharaja Jayaji Rao Scindia of the famous Scindia dynasty. It is a modern day palace and still serves as the family home of the ruling family. A significant portion of the palace has been converted into a museum and is open to visitors. The large dining hall and gigantic ball room with a ceiling made of gold are intriguing for a common man. Personally, I enjoyed visiting this museum as it offered me a nice sneak peek into the lives of the rich and famous. If you want to know what I mean, visit the place and you will know for sure.

Tomb of Tansen – Tansen, probably the most famous musician in Indian history was a native of Madhya Pradesh. Although he spent a major part of his life in Delhi at Emperor Akbar’s court as one of this ‘Navratnas’ (nine gems), his final resting place remains in Gwalior. The tomb of Tansen is a nicely built monument that gets significant number of tourists who visit the place to pay a tribute to this great musical son of the soil.

Gwalior has several other areas of tourist interest. But since, I was there for only 3 days I could not visit all of them. If you are a foodie, then the local markets offer a lot of delectable Indian food. To sum it up, Gwalior is an ideal weekend destination from Delhi that can be visited and explored over a weekend/long weekend.