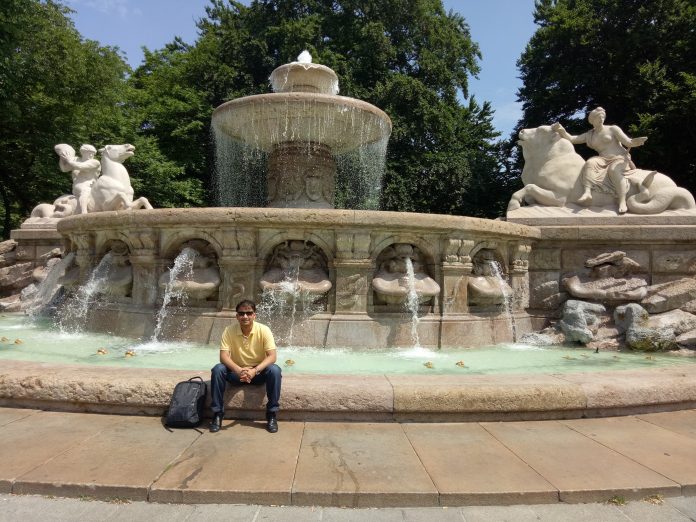 Why should I waste my money on buying a bottle of drinking water, when I could buy a bottle of beer for the same price?

This was a pervasive thought throughout my weeklong stay in Munich, Germany – a city famed across the world for its local beer and the annual beer festival – Oktoberfest. And it was not without a reason. Munich, the largest city in the Bavarian region of southern Germany is home to some of the world’s oldest breweries that serve some of the finest  lager in the world.

I visited Munich on a professional assignment and was lucky enough to manage some time off-from my professional commitments to enjoy some lovely evenings at its famed “biergartens” and also explore this historic German city.

Arrival in Munich from Delhi, India

Lufthansa Airlines runs a direct to Munich from Delhi. The schedule of this daily flight is suitable for Indian travellers who want to get some sleep on their flight and arrive early morning in the city. The flight departs from Delhi at 1:00 am (Indian Standard Time) and arrives in Munich at 5:30 am (local time).  I booked this flight as it suited my sleep habits perfectly. The intention was to get some sleep on-board and arrive fresh early morning in Munich for my scheduled professional commitments of the day.

I had pre-booked my hotel – Hotel Holiday Inn, Messe Munchen located in Feldkirchen on the outskirts of the city. I chose this hotel as it was located close to the International Fair Center (Messe Munchen), where most of my meetings were scheduled over the next few days.

Feldkirchen is small municipality in Munich and is sparsely populated. It is an ideal locality to experience the local vibe of the city as it is a residential area with vast open fields that provide a peek into the rural charm of Bavaria. Every evening, I used to take long strolls exploring this part of the city and its cafeterias. The local people who would visit these cafeterias in the evening to have dinner with their families were quite friendly. I would suggest people travelling to Munich to stay in Feldkirchen or any other outskirt municipalities as it gives travellers a real vibe of the city.  Personally, I enjoy interacting and spending time with local people in small cafeterias as it provides me with an opportunity to get true insights about a city.

Like most famous travel destinations across the globe, Munich too offers a Hop-on, Hop Off (HOHO) bus tour for tourists. Most of these tours originate from Munich ‘Hauptbahnhof’ (railway station) located near the city center. Tourists have multiple tour options to choose – from hour long trips to day long itineraries – each with their own advantages, depending on personal preferences.

Since I did not have the luxury of too much time, I choose the hour long express city bus ride. The idea was to get an overview of all the important tourist attractions in the city and plan a detailed excursion to the ones I liked according to my preference in the next few days.

Most tour operators for these trips operate double decker buses. I really liked them as the upper deck provided unhindered views of the city as we drove around it. Fares of all bus operators were almost similar. An hour long sight-seeing trip on these buses cost an average of 14-15 Euros which was considerate. The buses were also equipped with audio guides in English & German that informed guests about the history and significance of each attraction.

The HOHO city tour bus ride takes one through the old city and makes visitors aware of the several iconic buildings and city squares located in Munich. I made a note of the ones I intended to visit individually later and alighted from the bus after an hour long engaging tour.

Marienplatz – The Heart of Munich

Marienplatz – Mary’s Square – is also known as the city center. It is the most vibrant and popular tourist spot in Munich. The origins of Marienplatz can be traced to the 12th century when it used to be a popular medieval era marketplace. No doubt, the place is surrounded by several middle age monuments dating back centuries.

One of prime reasons for Marienplatz being a popular tourist zones is the presence of several tourist attractions in close vicinity. Some of these famous landmarks are

I visited Marienplatz three time during my weeklong stay in Munich to explore its surroundings. I also visited a large open ‘biergarten’ during one of these visits to the area but unfortunately cannot recollect its name.

During my evening strolls around Marienplatz and its adjoining areas, I noticed several buildings with some connect to art & culture. Some seemed like art galleries, one was a theatre, some design studios. Most of the signages outside these establishments were in German, so I could not exactly understand what they stood for. As someone who enjoys watching live theatrical plays, I would have loved to visit a theatre and watch a local play. But since, I was short on time I could not indulge myself in this activity.

Munich is a city rooted in history and is a must visit destination for tourists with a taste for history. Also, be luxurious on time. A 10-12 day itinerary is suggested to enjoy the city thoroughly.