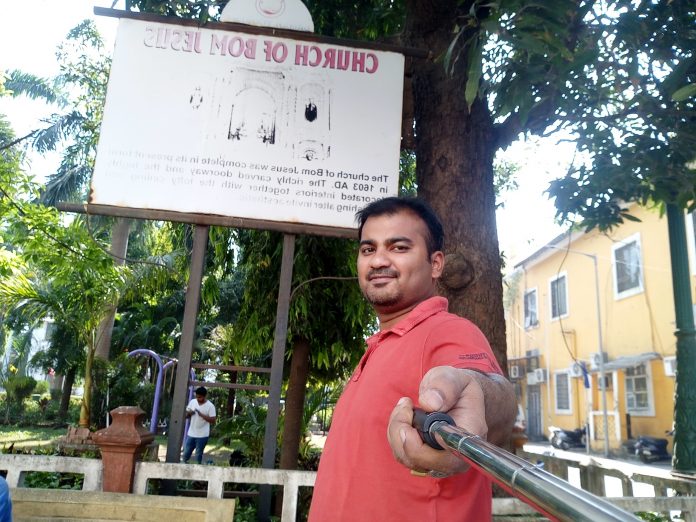 Although Daman was not on my bucket list in the immediate future, a chance professional assignement landed me on this small union territory early this year amd it was a pleasant experience spending a weekend at this small little town in the western part of India.

Daman, located geographically ‘within’ the Indian state of Gujarat but administratively not a part it shares a unique geography and history. Although the rest of India gained independence from British colonial rule in 1947, Daman remained a colony of the Portugese in India as they were unwilling to cede control of its territories in India to the new government. It was finally annexed by the Indian armed forces in December 1961 and declared a territory of India. Like other Portugese and French colonies in India that gained independence after 1947, Daman was declared a Union Territory and remains one till date.

Another interesting aspect of Daman is its name. Daman is officially termed as Daman & Diu which makes most people believe that the two are either the same place or adjoining areas. The fact however is quite different. Although, Daman and Diu comprise a single Union Territory administratively, both are located almost 700 kilometers apart – by road. Although the aerial distance is much lesser, there are no flights or ships that operate between the two, so the shortest possible travel time is by road which takes approximately 15 hours. The two things that however remains common between them is – both are union territories located within the state of Gujarat and both were under portugese rule. Probably, one of the reasons why they were clubbed as one.

There is no airport in Daman. If you wish to travel by air, the nearest airports are in Surat and Mumbai, located 120 and 170 kms away. I preferred Surat as it was nearer and the drive time lesser due to lower traffic.

There are a limited number of direct flights from Delhi to Surat. I opted for an early morning flight and arrived in Surat at 7 AM in the morning. A taxi ride for the next two hours costing INR 3500 landed me at my hotel in Daman.

Most hotels and resorts in Daman are located in Devka Road, which derives its name from the Devka beach. Most of hotels in this stretch are located alongside the beach and offer rooms with good views of the sea. I stayed in Hotel Ocean Inn, a mid-scale property with nice clean rooms and an excellent sea-view restaurant.

Daman is not a typical tourist destination. There are not many tourist attractions as such. However, it still has one very high tourist inflows. One of the reasons for this popularity could be its administrative status. Nearby Gujarat is a dry state whereas Daman being a Union territory has no such restrictions. It is no secret that a lot of people from nearby Gujarat towns visit it on weekends for some ‘tipsy fun’.

While, I did visit some of the most popular tourist spots in the city, I did not find any of them except the Church of Bom-Jesus, worth a mention. And, I have my reasons for such an opinion. Read on for details:

Moti Daman Fort: The Moti Daman fort was the first fort to be built by the Portugese in India in 16th century. It houses the famous Bom-Jesus church built in 1603 within its confines and several other portugese era buildings which are now used as administrative offices of various government departments. It is not a grand fort and is currently almost in ruins. The fort also has a small lighthouse which is in urgent need of restoration. Overall it is the only place I recommend worth a visit in Daman.

Church of Bom Jesus: The Bom Jesus Church in Daman was built in 1603 and is probably one of the oldest churches to have been built in India that has survived the test of time. It is a beautiful structure with a magnificent façade. The interiors of the church have been crafted from wood and the intricate carvings on it are worth a watch.

Nani- Daman Fort: The Nani Daman fort is almost in ruins and there is nothing much here except an old church. The church is beautiful but not as grand as the churches in other Portugese colonies like Goa.

Devka Beach: Devka beach is unlike any other beach I have been to in the past. One, it is very dirty. Second, for some strange reason, it did not have waves. I asked a few local the reason for such a situation. Some told me that pollutants from nearby chemical industries in Vapi have led to such a situation, while a few others told me it has always been like this. I don’t know whom to believe, but it actually is a big disappointment.

Jampore Beach: Having visited some of the most beautiful beaches in India, Jampore beach was a big disappointment for me. It was something similar to Chowpatty in Mumbai. As someone who despises dirt and crowds in beaches I left within minutes of arriving at this beach.

Jetty Area: Don’t even think of visiting this place if you despise dirt, noisy hawkers and large crowds. It is a small stretch by the sea and is haunt for young local people who drink carefree on its shores. The water is extremely dirty and so is the soil. Best left unvisited.

Local Market: If you have a sweet tooth, then try some of the local sweets. Also, you can pick up various groundnut based snacks. Gujarat is the highest groundnut producing state in India and its ‘Singdana’ is famous across the world.

Daman is another grim reminder of what large scale tourist inflow and industrialization can do a city or region. Daman is a highly popular tourist destination and is crowded with tourists, especially on weekends. The reason is simple – nearby Gujarat is a dry state whereas Daman being a Union territory has no such restrictions. As such, a lot of tourists visit it from nearby towns for ‘weekend fun’. Also, Vapi located just a few kilometres away is an industrial hub with a high concentration chemical industries and ranks amongst Top 3 most polluted cities in the world. Daman has a distinct old-world charm but the city has lost a lot in the past few years due to large scale industrialization. I hope the authorities take some steps to clean the sea around it.