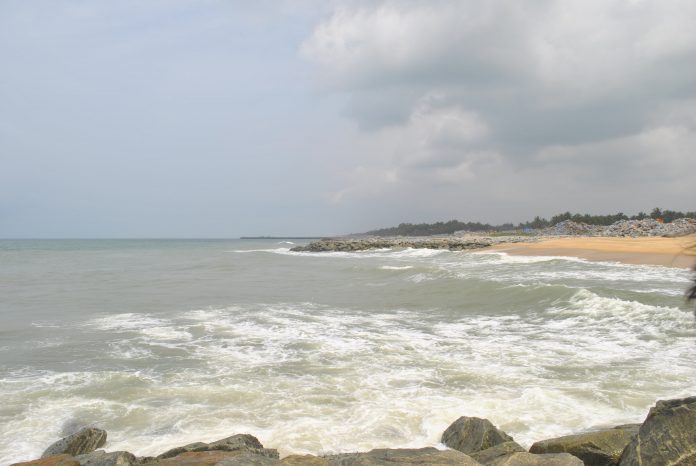 ‘The journey is the destination’ is an oft quoted adage by travel bloggers like me. While most road trips tend to uphold this belief, some go beyond expectations. A road trip from Murudeshwar to Udupi is one such journey and considering the myriad of experiences it offers, it compelled me to write a dedicated blog on this 100 kilometer journey between the two cities, during my road trip through the coastal belt of Karnataka. After having spent two days in Murudeshwar, we started our journey early in the morning as we wanted to have ample time on our hands to explore and experience the three major pit-stops en-route our destination – Udupi.

Located halfway between Murudeshwar and Udupi, Marvanthe Beach was our first pit-stop in the journey. While the name of this beach might sound unfamiliar, I am sure almost everyone with an interest in travel would have seen mesmerizing images or videos of Marvanthe beach on social media or on Karnataka Tourism ads. In fact, I too first chanced upon this unique beach in a Tourism Karnataka ad, a few years back.

For all those who are unfamiliar, let me introduce you to Marvanthe beach and its distinct geography.

The beach runs parallel to the Sauparnika River separated by a thin strip of road (National Highway 66). This unique natural construct creates a unique scenery for this beach and makes it one of the most photographed beaches in the country.

We arrived at Marvanthe beach in an hour drive from Murudeshwar and parked our car amongst a few other tourist vehicles parked alongside the highway. The beach is easily approachable from the road and visitors can easily visit the beach in a few steps. The Murudeshwar beach is clean and the water is sky blue. However, unlike other tourist beaches, very few people ventured into the sea in this beach as the waves are quite rough and not advisable for a swim. A few local hawkers too cautioned us from venturing into the waters as we walked towards the beach.

While we may not have been able to get a swim, another experience on Marvanthe beach made up for it.

Marvanthe beach has a series of sea dykes or artificial platforms constructed from large stones to protect the highway from getting flooded by sea-water during high-tides and heavy rains. Alternately on a sunny day, the same dykes act as walkway for tourists to experience the strong waves of the sea. While hesitant initially, we decided to walk down one of the several dykes built along the beach and I must admit that it was an exhilarating experience. After spending close to an hour at the beach we embarked on our journey ahead towards Udupi.

Unlike other famed tourist beaches, Marvanthe beach does not have any restaurants for tourists to spend time. Most tourists visit the beach en-route to another destination and as such an hour is a good enough time to explore the place.

Please watch my video on Marvanthe beach below to get an experience of the place.

Our next port of call was not a regular tourist hotspot. But, in the region we were travelling in, this place was a part of local folklore and has been credited exclusively for inventing and popularizing a distinct recipe which is now renowned globally over as Chicken Ghee Roast. It is a spicy chicken dish cooked in ghee with a concoction of myriad spices that give it a unique taste and flavour.

Considering my love for good food, there was no chance I would miss paying a visit to Shetty Lunch Home to experience this famed dish at the place of its birth. Although this meant a significant detour inside Kundapura city instead of bypassing it through the National Highway on our way to Udupi, I took the plunge.

Our GPS guided us through crowded city lanes until we reached our destination in the midst of Kundapura city. It is a basic eatery with no frills. One could gauge the popularity of the place from the number of cars that were parked outside. And since we arrived just during lunch time, finding a place to park our car was difficult. Thankfully, the security guard at the place came and spoke to us and after getting to know of the distances we had travelled to get to the place, volunteered to get our car parked and asked us to get into the restaurant.

Inside, the place was packed to the brim. The restaurant was divided into two sections – general and ‘family hall’. We managed to find a table inside the ‘family hall’ which meant Air Conditioning and ‘waiters in uniform’. The other section for general public did not have these fancy add-ons.

Without wasting much time, we ordered for the famed Chicken Ghee Roast dish along with a portion of Ghee Prawn Roast and other necessary add-ons. The portions were good and I realized the famed nature for this dish the moment I had my first bite. The dish had a distinct taste and without doubt something very different from what I have had till date. The next 60 minutes were spent relishing the food and boasting to my wife of my wise decision to visit the place and relish this famed recipe at the place of its birth.

After a filling lunch topped by some local sweets, we proceeded to the next pit-stop on our journey to Udupi.

Kodi Beach is a famous beach of the region located at a distance of 10 kilometers from Kundapura enroute to Udupi. It is a short 30 minutes drive from Kundapura and is a lesser tourist frequented beach due to its location.

There are three places of interest in this region.

First, the Kodi Beach. It is a long stretch of clean white sands overlooking the vast Arabian Sea on the other. Similar to Marvanthe, this beach has local river Suvarna also known as Panchagangavalli flowing parallel to it separated by a thin strip of land that houses a local fishing village and a road that connects to the Kodi Bengre Delta.

Second is the lighthouse that falls midway. It is a British era lighthouse and has been preserved well. It is however slightly shorter than most lighthouses you would usually see in coasts.

Third, is the Kodi Bengre Delta. This is the point where the river Suvarna meets the Arabian sea and forms a beautiful delta. Since we visited in spring, the delta also had a significant number of migratory birds that were perched on the small sand dunes that had surfaced on the river due to the lesser flow of water at the point where it ended its journey and merged with the sea. The entire area seemed straight out of a postcard and we spent almost close to 2 hours walking around the Kodi Bengre Delta area before departing onwards on our journey to Udupi.

If you are planning a road trip to the coastal belt of Karnataka, then I strongly recommend you to follow this trail. You will not be disappointed.

I have tried to capture the Kodi Beach, Light House and the Kodi Bengre in this short video. Do watch it to get a virtual account of my journey.